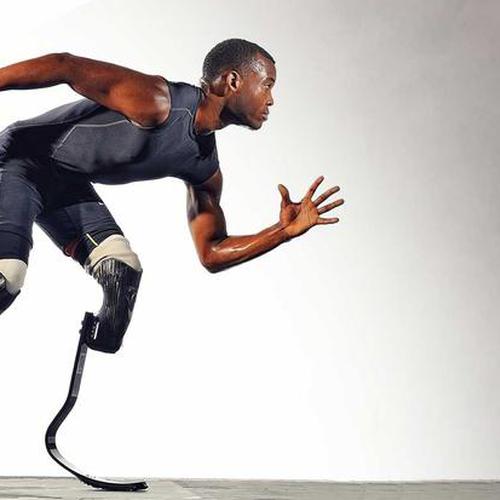 Patrick “Blake” Leeper is an eight-time Paralympic Track and Field international medalist, world record holder and three-time American record holder. In June of 2018, running in a field of able-bodied runners, he shattered his own world record in the 400 meters, coming in at 44.42, the fastest time ever by an amputee. He started his medal run in 2011 at the Parapan American Games where he took his first silver in the 100-meter dash. He went on to compete in the 2012 Paralympic Games in London, where he picked up two more medals, a bronze in the 200-meter dash and silver in the 400-meter dash, losing to South African Oscar Pistorius, whose world record of 45.39 seconds Leeper eventually broke. In 2013, Leeper also took four medals at the Paralympic World Championships in Lyon, France, where he ran as part of the world record- setting 4x100-meter relay gold medal team. At the same event he took the silver medal in the 100-meter dash, 200-meter dash and 400-meter dash.

Patrick “Blake” Leeper was chosen by the US Paralympics to represent Team USA in Rio 2016. At the Paralympic trials, he set a new American record in the 200m with a time of 21.5 and a new America’s record in the 400m at 46.1. He took silver in the 100m despite losing a prosthetic leg crossing the finish line live on NBC. In April 2018, Leeper set a new world record of 45.05 in a 400 meter race, not only beating Pistorius’ record, but placing him in the top 10 amongst able bodied athletes. Leeper’s medal collection includes one gold, six silver and one bronze. Over his career, he hopes to win more medals than any Paralympic athlete in track and field. He is also striving to be the first American track and field Paralympian who qualifies for the able bodied Olympic trials. In addition to the medals he has already won, Leeper holds one 2013 Paralympic world record in the 4x100m relay and three American records in the 100-meter dash (10.91). On June 20, 2015 Leeper broke his own American record in the 200-meter dash (21.49) and smashed the 400-meter dash record with a time of (46.54). Leeper’s record (4.42) for the 4x100-meter relay still stands today—making him the first-ever double leg amputee under 45 seconds.

Born without legs from a congenital birth defect, Leeper did not start racing until 2010. It was at his first ever race in Edmond, Oklahoma that he caught the attention of the Associate Director of High Performance for U.S. Paralympics Track and Field, who convinced his parents to let their son move into the Olympic Training Center in Chula Vista, California, where he started his habit of winning. That’s when Leeper left the University of Tennessee to embark on a journey that no one could envision for a kid from Tennessee born without legs.